Will US-China relations get better？

Will US-China relations get better? This was the main topic at the open forum of the North Pavilion Dialogue hosted by the Institute of International and Strategic Studies (IISS), Peking University (PKU) on Oct. 19, 2018. 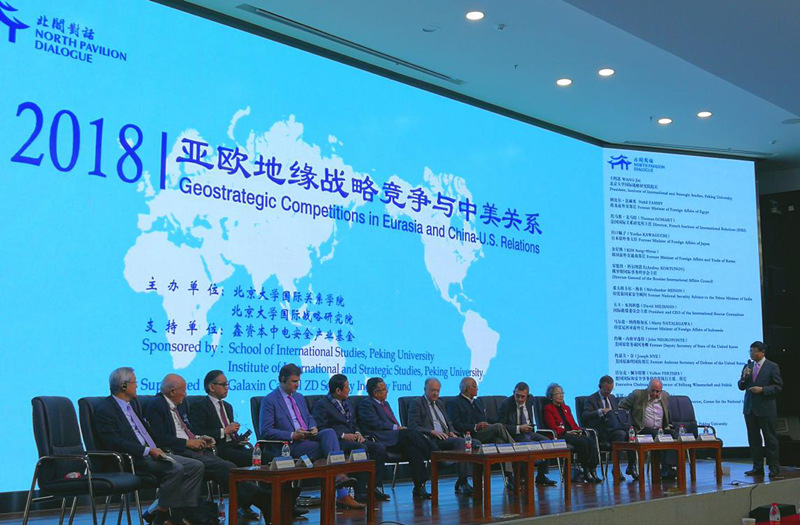 Joseph Nye, former Assistant Secretary of Defense of the United States, believes US-China relations “in the long run, good; maybe in the short run, not good.” He explained that in the long run, US-China have no extensional threat, and basically the two nations’ interests are going to converge, so the two sides should have more areas of cooperation instead of competition. He also disagrees with those who speak about a “cold war” between the US and China, by citing frequent economical, social exchanges, as well as strong links in other fields.

According to Nye, from the short run, there are several reasons for saying "not good." One is there are a number of irritants growing in the US-China relationship, who thinks trade between the US and China is not "fair." There are also other concerns from the US side over the South China Sea, etc.

While Wang Yizhou, Associate Dean with School of International Studies at PKU, expressed his different opinion. He is more optimistic on current US-China relations, but shows some concerns over long-term bilateral ties.

According to Wang, for China, its external environment has been improving during the past several years, especially its regional surroundings have seen positive changes in recent months, including the cooling down of the Korean Peninsula issue, the warming relations with Japan, the closer cooperation with other Asian neighbors, including those previously had disputes over the South China Sea issue, etc. China-Russia relations have also entered a “better than all” period.

But he continues that though all these positive changes have indeed created a better environment for Beijing, they also might hint that, relevant countries are tactfully choosing to keep a low profile, in the short term, to avoid the risk of being sorted out by the “super power” amid its conflicts with China.

Wang pointed out that US-China relations are at a strategic crossroads. He hopes that by deepening reform and opening up, China could stand up to the test and the two sides would work together towards the same direction.

Yet, he said, after seeing all the moves taken by Washington, he could not help but worry, if not properly managed and coordinated by the two sides, the bilateral relations might slip into deeper confrontations in the long run.

They all shared their viewpoints on the current international situation, especially against the backdrop of escalating tensions between the US and China.

But in all, the participants tend to agree that US-China relation is one of the most important international relations today, though there are some challenges between Washington and Beijing currently, both sides should step up efforts, like what the host of the panel discussion Wang Jisi, President of IISS, said, for the China part, it still has a lot to do to improve and stabilize Sino-US relations.

And vise versa, the US side should not weigh everything with the scale of national interests. As a sole super power, and as one of the most important world leaders, international responsibilities, world peace, and development rights of other countries, should also be taken into consideration.

Hope we will have a better world tomorrow, with the coordinated efforts of all nations, especially the key players, including the US, China, the EU, etc.

(The opinions expressed here do not necessarily reflect the opinions of Panview or CCTV.com. )

Next: Chinese vice president: China remains committed to opening up

We were involved in environmental care

How to locate children's theme parks?